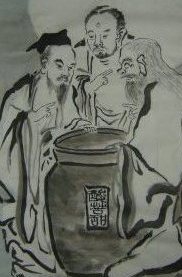 The vinegar tasters depicts Confucius (left) to whom the vinegar is sour, unlike the good old days when things where in harmony. For Buddha (middle) the vinegar, like life is bitter. For Loa Tzu (right) and Daosim the vinegar like life is sweet and a bit of laugh.

Religion in China has been compared to a cauldron resting on three legs - Confucianism, Buddhism and Daoism (sometimes spelt Taoism) add to this melting pot, folk traditions, myth and legends. Prior to Confucius, Buddha and Loa Tzu (Daoism's founder) shamans provided the link with this and the spirit world. The spiritual and religious mix is still to this day flavoured by these pagan roots. Shamanism is still practiced throughout the world by many diverse ethnic groups and can be traced from Finland through Siberia and across the bearing straights into the Americas. A Shaman acts as mediator between ours and the capricious world of spirits whom we are at the mercy of. These sprits are often representative of the natural world, where the gods often come in animal form or are associated with particular rivers, lakes and mountains. Chinese mythology and pre-history has many references to human to animal transformation typical of the shaman. The animal imagery of many Qigong, Tai Chi and Martial Arts practices also testify to these origins. Also the early emperors officiated at key rituals, providing the link between heaven and earth, seeking omens and making offerings on behalf of their subjects to ward off floods and other disasters, punishments from above.

Archaeology has uncovered evidence of the practice of divination. Heat applied to indentations on turtle shells and Ox bones produced cracks which where then read for omens, these readings where kept, eventually buried and subsequently uncovered millennia later. Another method involved the drawing of yarrow stalks as used for making readings from the Yi Jing (I C'hing) the Book of Changes, which dates from the 12th century BC, and forms the basis of much of china's philosophy, it is from this text that the concept of Yin and Yang can be found.

Following the creation of Yin and Yang, they combined to form the trigram, these diagrammatically are combinations of three lines, a broken line is yin and solid unbroken line is yang, giving eight possible Trigrams arrange in a circular pattern, traditional there are two arrangements, the King Wen or Later Haven and the Fuxi or early Heaven. The Trigrams represent elements of nature that could be roughly labelled as, Wind, Fire, Earth, Lake, Heaven, River, Mountain and Thunder. The Eight Trigrams are further doubled to form groups of six lines giving the sixty four hexagrams of the Yi Jing.

The theory of Yin and Yang reflects the fundamental dichotomy of the universe, but not to be confused with western notions of good and evil. These forces are equal and opposite and co-exist ideally in perfect balance, as represented by the Yin Yang circle symbol, each flowing into one another in a continuous cycle and containing a dot of each within the other. The Yin and Yang separated at creation, the eastern big bang, the dark, cool, heavy Yin sinking, whilst light, hot, white Yang rose. All things in the universe have a Yin and Yang aspects. One may predominate over the other but can not exist with out it. A mountain will have a side lit by the sun - the yang side, and therefore must have one side in shadow - the Yin side. The Ying Yang symbol also referred to as the Tai Chi symbol represents the cosmos, showing the dichotomy of nature and cycles of change, with for example the yang of summer waning with the coming of autumn followed by the increasing Yin of winter. In the same way that day follows night. Within the human body there is also Yin and Yang, when these do not balance, according to traditional Chinese Medicine, there is illness.

Following the creation of Yin and Yang, they combined to form the trigram, these diagrammatically are combinations of three lines, a broken line is yin and solid unbroken line is yang, giving eight possible Trigrams arrange in a circular pattern, traditional there are two arrangements, the King Wen or Later Haven and the Fuxi or early Heaven. The Trigrams represent elements of nature that could be roughly labelled as, Wind, Fire, Earth, Lake, Heaven, River, Mountain and Thunder. The Eight Trigrams are further doubled to form groups of six lines giving the sixty four hexagrams of the Yi Jing.

Developing as a separate theory to that of Yin, Yang and the Bagua, The five transformative moments descried elementally processes in nature, sometime referred to as the five elements or phases, in a comparison with other ancient systems. Wu Xing referrers more to processes of creation and destruction than irreducible elements, here wood creates fire, fire creates earth, from the ashes, metal is created form the earth, and water forms on metal as condensation. Water destroys fire, Fire destroys metal etc. Again this theory is incorporated all area of life including medicine, where the different organs are associated with these different elemental processes. Whilst a different theory it sits alongside the concept of Yin and Yang, where Fire is Yang, Water is Yin, Wood and Metal is Yin and Earth is Natural.

Although these ideas seem to modern western eyes, unscientific even superstitious, they have never the less an empirical basis, that is they are based on observation, further more the language of Yin and Yang, the Trigrams and the five moments have underpined much of the last few thousand years of Chinese thinking and are crucial to understanding its philosophy and religion, and by extension medical theory and martial arts.

Ting Jing is participant in the Amazon EU Associates Programme, an affiliate advertising programme designed to provide a means to for sites to earn advertising fees by linking to www.amazon.co.uk. In this case for recommend reading.